NordVPN is based in Panama, one of the best places in the world to be for a company which doesn’t retain user activity logs. In terms of user interest as well as features offered, this is one of the best consumer Virtual Private Network (VPN) services that money can buy.
Best of all – it really isn’t that expensive.
With a massive pool of over 5,000 servers in 62 countries NordVPN has the largest network I have seen to date. It also supports almost every form of consumer device around today and is known for being ridiculously user-friendly.
At the same time, it also offers enough options that it covers all the bases, from Onion support to military-grade encryption and continuous updates that keep it cutting-edge.

Verdict
NordVPN is a bit difficult to beat in cost – with the lowest long-term pricing plan so far. Couple that with an extensive network, cutting-edge features and a great reputation, NordVPN is a clear winner all round.
Review Summary 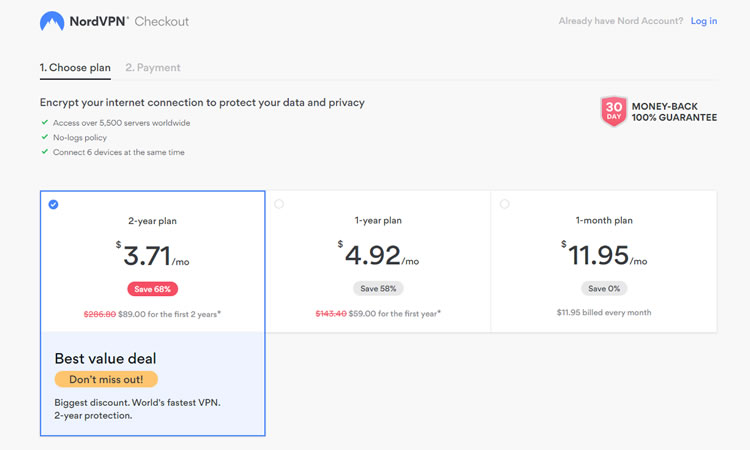 NordVPN latest pricing – The 2-year plan costs $3.71/month and is fully refundable for 30 days (order here).
NordVPN has various price points you can choose from depending on how long you want your subscription to last. As a rule of thumb, the longer a period you subscribe for, the lower a price you must pay per month.
NordVPN adjusted their long term plan pricing recently, 2-year and 1-year plans now cost $3.71 and $4.92 per month respectively. I have to say that for $3.71 a month on the two-year plan, NordVPN presents a value proposition that is reasonable.
If you pay by month, NordVPN prices are around on par with industry norms.
Compare NordVPN pricing
2. NordVPN Can Help Keep Your Identity Safe
Personally, I feel that VPN providers shouldn’t be based in countries which have strict data retention laws. Those laws and the primary function of VPNs – anonymously just present a clash in interests.
We’ve seen exactly how badly this can turn out for some VPN users like in the case of IPVanish, a United States-based VPN service provider which allegedly provided logged information on one of its users to Homeland Security, resulting in the arrest of a suspect. The biggest controversy in that case was that it wasn’t even supposed to pose those logs.
Alternatively, countries like Panama, which NordVPN is based in is more consumer-oriented and gives less power to authorities. This makes it easier to believe that NordVPN will be able to stick to its guns in case any attempt is made to pry any information out of it.
NordVPN’s Strict No Logs Policy
Given what I’ve shared above, I am also more inclined to believe NordVPN when it states a firm no logging policy publicly.
According to their own website, “NordVPN guarantees a strict no-logs policy for NordVPN services, meaning that your activities using NordVPN Services are provided by automated technical process, are not monitored, recorded, logged, stored or passed to any third party”.

Anonymous Payment Method
Since you only need a username and password to sign up, for the truly paranoid there is also the option to pay by non-identifiable means. This includes cryptocurrencies like Bitcoin which will help further dull any trail which could lead directly to you.
Kill Switch
If ever you’re using NordVPN and your connection drops, you can set the application to complete cut off the data flow from your device. This is to prevent your identity leaking since it is no longer protected by the VPN server.
You can set NordVPN to operate at two levels on this, either a complete termination of data flow or a restricted one. The desktop version of NordVPN can use both. The restricted version is more useful to mobile devices and allows you to choose which applications on your device are prevented from transmitting data.
Double VPN
For those who are more serious about hiding their identity, Double VPN is something you will like. VPNs work by routing your connection through a server that changes your IP so that your original is hidden.
By using the Double VPN feature, your connection will be routed through two separate servers, therefore changed twice. This adds an additional buffer layer in case one of the IP leaks for any reason.
3. Strong Encryption Protects Your Data
Using a combination of military grade encryption and secure protocols, NordVPN is one of the most secure consumer VPNs around. AES-256 encryption is as high up the food chain as it gets now and is used by governments and militaries around the world.
The encryption is combined with a range of security protocols which you can choose, depending on your needs. Your choice of security protocol will affect your VPN connection speed as well as what type of encryption you can use.
4. NordVPN Speeds – One of the Fastest VPNs Around
NordVPN has one of the most extensive server networks I have come across to date. It boasts over 5,000 servers in almost 60 countries.
Some of you may be wondering why this is related to speed, but physical distance from a VPN serve is one of the factors affecting speed and ping response. A server near your actual location would give you a better chance of low ping rates and high speeds.
Speed ​​tests on VPN only serve as a guideline since many factors affect actual speed. To make the best of a VPN connection, you need a powerful device (for handling encryption and decryption) as well as strong actual line speed of your Internet connection.
Reference Speed

The reference speed without VPN connection (the actual result here). Ping=5ms, download=400.43Mbps, upload=310.01Mbps.
For the purposes of these test, I am running them on a 500Mbps line with actual throughput of around 400Mbps up and 300Mbps down. The device I am using is a laptop with an Intel 8th Generation processor that peaks at 3.4GHz.
NordVPN’s US Server Speed

NordVPN speed test result from US server (the actual result here). Ping=251ms, download=36.49Mbps, upload=9.28Mbps.
US speeds on the NordVPN connection for me were slightly lackinglustre. However, this isn’t solely the fault of the VPN since physically I am on the other side of the world from the US. This is also indicated in the long ping time form the US server.
Note – There are other report that mentioned that NordVPN getting slow occasionally in the US and Canada.
NordVPN’s Europe Speeds (Germany)

NordVPN speed test result from Germany server (the actual result here). Ping=225ms, download=31.04Mbps, upload=15.09Mbps.
Also not exactly blazing speeds, I got similar results from Europe-zone servers as the US servers. 31Mpbs down and 15Mbps up isn’t fantastic, but still more than enough not browse and even for limited downloads.
NordVPN’s Asia Speeds (Singapore)

NordVPN speed test result from Singapore server (the actual result here). Ping=10ms, download=127.90Mbps, upload=198.14Mbps.
As expected, my neighboring country gave me excellent results. Not surprising given its physical proximity and excellent reputation for world-class infrastructure. 127Mbps down and 198Mbps up isn’t something to sneeze at from a VPN provider.
NordVPN’s Australia Speeds

NordVPN speed test result from Australia server (the actual result here). Ping=56ms, download=76.01Mbps, upload=107.96Mbps.
Given that Australia is relatively close as well, results were as expected here too.
Updates on NordLynx Performance
Now, OpenVPN is the fastest and most robust protocol that NordVPN has, but it had been tested out WireGuard and released NordLynx – a new protocol built adaptively around WireGuard. NordLynx is suppose to be able to surpass everything in the market in terms of both speed as well as encryption levels.
To get a better idea of ​​its performance, we have run a number of speed tests on these two protocols. Here are our results (click links to see actual speed test results on SpeedTest.net):
OpenVPN Performance Tests
NordLynx Performance Tests
As you can see, speeds were up considerably when using the NordLynx protocol as compared to OpenVPN. On average I managed to see an estimated 2-3 times improvement in performance.
It’s important to note that only speeds were improved and not latency. Latency depends more heavily upon distance from the server rather than the protocol involved.

1. P2P Restricted to Specific Servers
If you recall the speed ranges from the tests above, I managed to eke out speeds ranging from 30Mbps to 127Mbps. This is perfectly fine for video streaming, even HD content. This means that technically, you should be able to stream content perfectly well from any site around the world.
As usual my standard test was to try and connect to the BBC iPlayer, which worked out fine. I also streamed a few 4k YouTube videos which were smooth and stutter-free.
NordVPN does allow P2P traffic but this is limited to specific servers. To do so, you’ll have to make the selection in your NordVPN client. I recommend just choosing ‘P2P Servers’ and allow NordVPN to select the best one for you.

Connections to peers were a little intermittent in the beginning, but once you give it a little time, I found that everything goes smoothly. I was able to run my torrents at almost the full speed I earmarked for my downloads, which was quite a lot!

Can you game on NordVPN?
If for some reason you feel the need to game through a VPN, you’ll need to select a server near you in order to reduce lag caused by longer pings. The line speed should be fast enough. However, if you’re depending on using the VPN to connect to specific overseas servers for gaming, that might be a little bit of a problem.
Ping rates show themselves to increase quite rapidly the further away the server is. This isn’t isolated to NordVPN though, it’s just a fact of life – technical limitations, so to speak.
NordVPN on under-powered Routers
All these tests were run on the default protocols and settings in the NordVPN Windows client. As an important point to be inserted here, all VPNs are extremely high overhead in terms of CPU resources consumed due to encryption and decryption.
This makes them less than ideal to be run off under-powered devices such as routers. I would not recommend running any VPN service off a router unless you have a VERY good router (which probably costs a bomb).
Newer (less than two years old) desktops, laptops and mobile devices should be fine.
NordVPN breach caused by vulnerabilities in a datacenter at Finland
NordVPN has confirmed an attacker breached one of its servers in Finland. The incident happened in March 2018 (news reported on Engadget 18 months later) and there are no signs showing that any of NordVPN users were affected or that their data was accessed by the malicious actor.
Here are a few key points about the breach, based on an official email sent out on October 23rd, 2019:

Verdict: Is NordVPN a Good Buy?

With the lowest long-term pricing plan I have seen to date, NordVPn is a bit difficult to beat in cost. Couple that with a very extensive network, cutting-edge features and a great reputation, NordVPN is a clear winner all round.
Speed-wise I feel that it is a little bit more unstable compared to ExpressVPN but not by much. After all, the experience was seamless, and I hardly felt that I was being restricted by using a VPN service at all. Well, perhaps during single downloads, but that’s quite rare for me.
To Recap –
cons of NordVPN
NordVPN Alternatives
Popular alternatives to NordVPN: Surfshark, ExpressVPN.
Earning disclosure – We use affiliate links in this article. WHSR receive referral fees from companies mentioned in this article. Our opinions are based on real experience and actual test data.